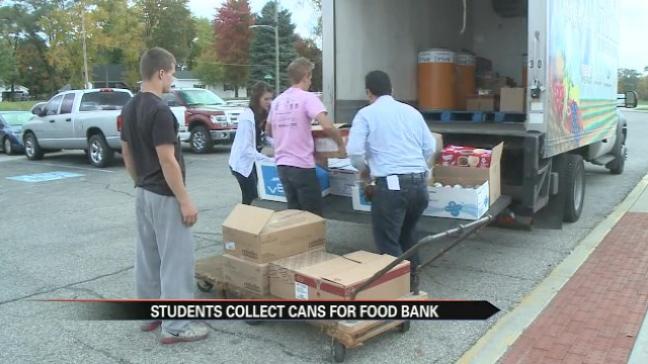 Students from John Glenn, Lacrosse, LaVille, New Prairie, and Trinity High Schools have been hard at work for the past month collecting donations for the Food Bank of Northern Indiana.

Each of the schools spent a designated day for approximately four hours going door-to-door to collect canned food donations they dubbed “Can-O-Treating.”

On Thursday, the students presented roughly 3,000 cans to the Food Bank on behalf of those who are food insecure in Michiana.

John Glenn senior Ryan Kulwicki spearheaded the idea and says he did it to get his peers involved in community service.

“We started this project so that students at local high schools could get involved in their community,” says Kulwicki.

John Glenn High School Career Counselor Franklin Sheneman is enthusiastic the students went above and beyond to help those in need.

“I'm proud of the students because they are able to recognize that hunger isn't just at the holiday season," says Sheneman.

This is the second year for this project.