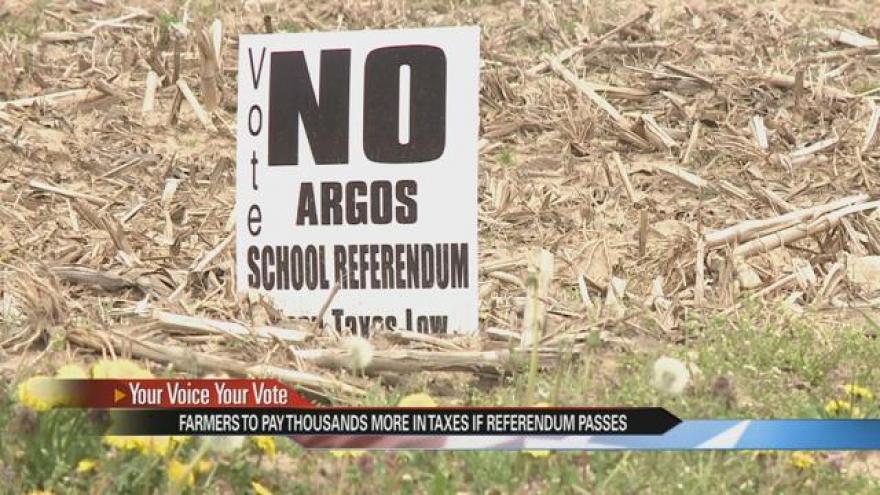 Voters in Argos have just over one week to decide if they will support a seven year additional tax proposal for a maximum of 61 cents of a homeowners net assess value.

He and his wife attended Argos High School and now his children do too.

But he isn’t voting ‘yes’ to the school referendum come May 3rd.

He said it could put his business and others in this district under great financial stress.

“We’re already paying the highest tax rates in the county and with this put on top of it it’s going to be more than a lot of agricultural land owners and businesses may be able to bare,” McIntire said.

According to statistics from the state of Indiana, Argos has the highest property tax rates in Marshall County, at 3.24%.

Farmers could feel the most impact if the referendum is passed.

“I think this is exactly the wrong direction we should be going if we want to truly strengthen the school, grow the local economy, and do the right thing for our children,” Thompson explained.

But others ABC57 News spoke to earlier this month who support the referendum disagree.

‘Vote yes’ and ‘vote no’ signs are everywhere you look.

“I would recommend that we vote no and that we truly come together as a community and solicit ideas from everybody,” said Thompson.

Those in opposition said the last thing they want is for the school to close.

However, they want to come up with another solution.

ABC57 spoke with the Argos Schools superintendent earlier this month, she said enrollment and funding have decreased, which is why this referendum is important for the district. For that story, click here.