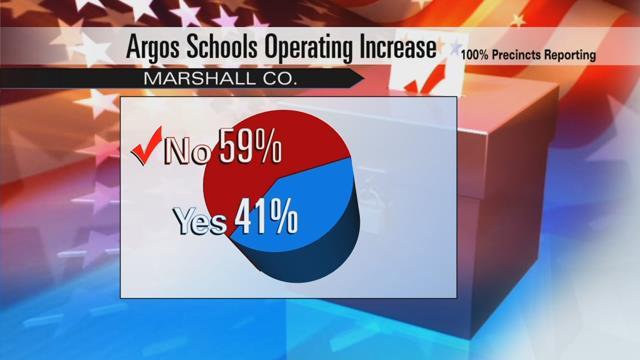 In a near record setting voter turnout, over 58 percent voted to turn down the tax hike, meaning looming trouble for Argos schools.

Robin Cupke is the acting inspector for the Argos voting area at United Methodist Church.

“We had a high turnout.  1,161 voters. Normally we have dismal turnout especially for primaries but we a had a great turnout. The last time we had any turnout like this was the first election for Barack Obama,” said Cupke.

A big turnout, for a big night for area children, residents and farmers.

“I voted yes. I want to see our schools stay here. And that’s about it,” says Argos resident Terry Serie.

And so did native Daryl Gibson, whose family likes the school district.

“ We live here because we like the school district. It’s either that or bus them to Plymouth or Culver. It’s the best idea to vote the schools here,” said Gibson.

A yes vote would have supported a seven year additional tax proposal, but that could mean a big hike for farmers.

A no vote means a re-tooling of the Argos schools as they will need to search for additional funding elsewhere.

“No matter what it turns out to be-more people that vote the better because it gets you a bigger representation of the public ,” said Gibson.