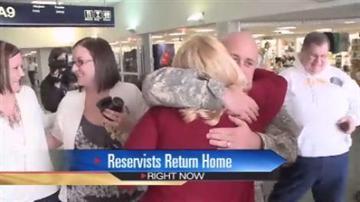 SOUTH BEND, Ind. -- Two Army reserve soldiers got a surprise Thursday afternoon. David Monsivais and Shawn Waldron were greeted by family and friends at the South Bend Regional Airport. Both have been in Kuwait for the past ten months.

They weren’t expecting the surprise.

"I want to spend as much time with them as I can,” said Sergeant David Monsivais.

The two soldiers are excited to spend time with family.

"There's always that period where it's like, Is he really here? Or is he going to leave again?” said Kimberly Monsivais, David’s wife.

"You literally forget how much you appreciate them until they're gone,” said Melissa Waldron, Shawn’s wife.

In addition to being welcomed home by family, Shawn Waldron, a Mishawaka firefighter, was also greeted by his brothers in public service.

"We really care for our guys when they come on the job, especially with him serving his country like this,” said Brian Linson, Captain of the Mishawaka Fire Department.

Now that the two are back, they're looking forward to what's next.

“The transition. Going to try to get my sleep schedule back, eating right, and then, other than that, going back to work in the next month and a half,” said David.

But for now, they're just looking to catch up on some much needed family time.