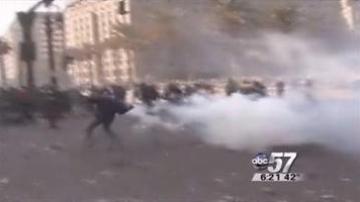 Police arrested 21-year old Luke Gates and two other Americans Monday. Officers accused the trio of throwing gas bombs into a crowd during a protest.

Gates is a political science major. He's been studying abroad at the American University of Cairo since August, but now he's headed home.

"We just said we loved him and we're just happy he's coming home, and I know he's happy,” said Bill Gates. “Happy to hear our voices, and he was just so excited about coming home."

The violence across Egypt began Saturday. Several people have died, and the political system is in chaos.  Protestors are calling on military leaders to hand over power.