Arrests made in deadly carjacking in New Jersey 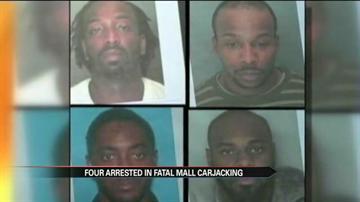 ESSEX CITY, NJ — Four men have been arrested in connection with a deadly carjacking that shocked Christmas shoppers.

The four suspects are charged with murder, carjacking and other counts in the carjacking of Dustin Friedland and his wife, Jamie.

The couple had just finished shopping when two men approached and shot Friedland in the head on Dec. 15.

"Many of the leads that we received in this case came from our four most urban towns and I believe that's because the sheer senselessness of this case outraged people," said Prosecutor Carolyn Murray.

The four suspects are being held on $2 million bail each. They face up to life in prison if convicted.