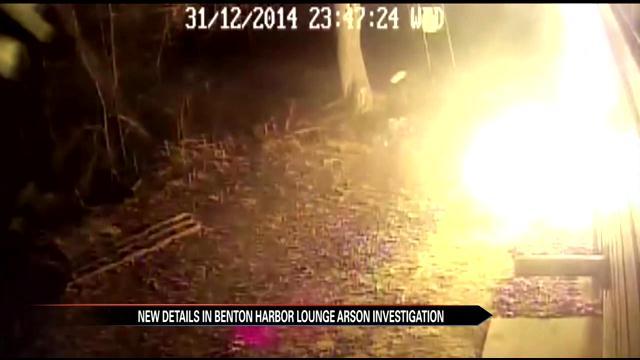 On New Year's Day, over 250 people were inside Ajay's Lounge when two men lit the building on fire. The suspects were caught on surveillance video.

Steve Johnson, the Fire Marshall at the Benton Harbor Department of Public Safety, said it happened around 3 a.m. and it's a miracle that no one was hurt or treated for smoke inhalation.

Johnson said, “Sometime people just really need to come forward. Because this is so cowardly. This is such a cowardly act, it's virtually a domestic terrorist attack in my opinion. We really need to bring these two individuals to justice.”

In the surveillance video, one suspect takes his shirt off and tosses it to a guy who slings a flammable substance everywhere.

He then uses a match to ignite the fire.

Johnson said, “What's kind of surprising is there's an individual standing at the door at this time approximately 12 feet away smoking a cigarette!”

An employee at Ajay's Lounge can be seen smoking a cigarette while the arsonists are lingering near the wooded area.

Johnson said, “This is just crazy, it really is. To have the audacity to splash gas on the corner of a building with 250 plus celebrators  inside, quite frankly that's attempted murder.”

Johnson said two officers were in the parking lot at the bar making sure nothing got out of hand.

Johnson said, “Thank goodness we had two Benton Harbor public safety officers who were out in the parking lot and saw the flames and came running around the fire and starting evacuating people.”

One man who works at the business next door to the night club said it was a pretty gutsy move by the suspects.

Josh Burnson said, “Pretty unsafe I guess, especially since there were cops sitting outside!”

The Benton Harbor Department of public safety said they are offering a $500 reward for anyone who calls them with a tip that leads to an arrest.