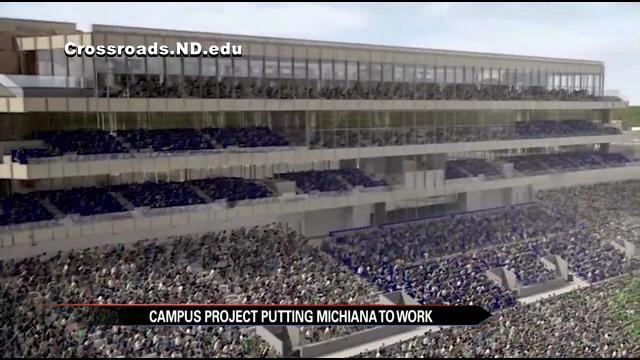 With the final Notre Dame home game of the season behind us, the university's Campus Crossroads project is well underway, and the local work force is welcoming what they say is the biggest project in Michiana since 2009, with open arms.

“They are our best employer year in and year out,” I.B.E.W. Local 153 Electrical Workers Business Manager Mike Compton said Monday.

Notre Dame welcomed its final football crowd of the season over the weekend.

“There's going to be quite a few construction people milling about with the students for the next three years, so should be exciting,” Compton said.

And now, the university is pushing forward on its $400 million Campus Crossroads project.

“We're looking at a good 24 to 30 months of good, solid work for a fair amount of people,” Compton said.

A university spokesperson says more than 300 construction workers will be needed on-site?

“It will be a challenge for us at the building trades but one we're very much up to, have been planning on for a couple of years and looking forward to getting under way,” Compton said.

As promised, Notre Dame will draw from the local labor force.

“The people working on the job will be from here, 99.9 percent of them,” Compton said.

Compton says he has been prepping Michiana electricians for months.

“We've taken in an extra number of apprentices this year. First large group in quite some time, so we're starting to do that and bringing on people to get ready for that project,” Compton said.

For a massive undertaking that won't only put people to work, but also, will breathe a breath of fresh air into Michiana's economy.

According to an economic impact report released last year by the University of Notre Dame, the university's employment, spending, students, visitors and research brought in nearly $1.2 billion in economic activity in 2012. University officials say that number is expected to grow significantly through the Campus Crossroads project.