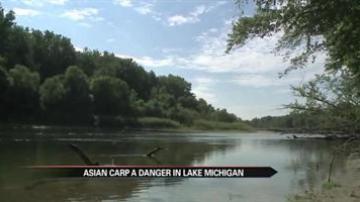 SOUTH BEND, Ind. -- Asian carp are dangerously close to Lake Michigan and researchers are scrambling to try to stop them from destroying the Great Lakes ecosystem and economy.

Experts from Notre Dame say it isn't time for widespread panic, but preventative measures need to be taken before it's too late.

"How many would it take to establish a population?" said Christopher Jerde of the Environmental Change Initiative.

That's the question Jerde and other researchers are asking.

Just a few days ago an Asian carp was pulled from a river less than 50 miles from Lake Michigan.

Asian carp are widely feared because they out compete native fish for food and space.

If Asian carp are not stopped, they will devastate the fish population that's lived here for thousands of years.

That would cripple the Great Lakes fishing industry.

Jerde is one of many researchers trying to find a way to stop Asian carp.

Recent attempts have had limited success.

Electric barriers aren't working, and according to experts - as few as ten Asian carp could decimate Lake Michigan's entire ecosystem.

The U.S. government is introducing a new plan to stop Asian carp. The report was scheduled to be released Wednesday.