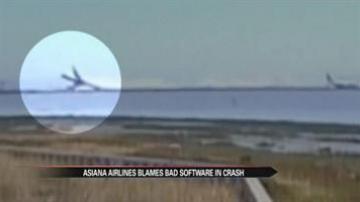 Asiana Airlines says pilot error was at least partly to blame for three people's death in the 2013 crash in San Francisco.

They said the pilot "could have failed to respond quickly" to problems with the aircraft's auto throttle system.

The airline is also blaming a faulty warning system for the crash saying that the bad software design did not alert the crew.

Boeing said the plane and its systems were not to blame for the crash.