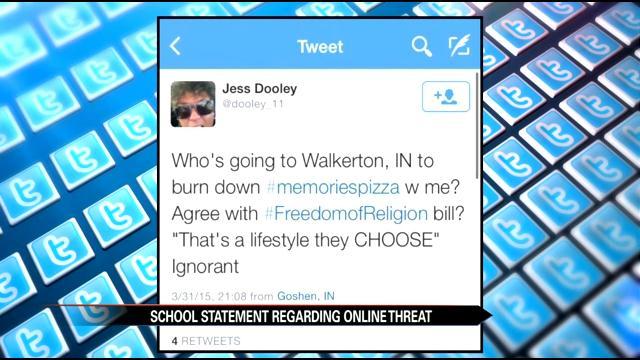 The Concord High School assistant softball coach who Tweeted a threat about Memories Pizza is no longer a coach.

Concord Community School administrators told Jessica Dooley on Thursday, April 16 that her coaching contract was cancelled and the board confirmed the cancellation at its meeting on Monday, April 20.

Dooley remains suspended from her position as a teacher's aide for the Elkhart County Special Education Cooperative with Goshen Community Schools.

Dooley Tweeted on March 31, “Who's going to Walkerton, IN to burn down #memoriespizza w me? Agree with #FreedomofReligion bill? “That's a lifestyle they CHOOSE” Ignorant”

According to the Concord Community School Corporation, Dooley contacted them and admitted to sending the message from her Twitter account.

The superintendent stated in a press release, “The promotion of harmful, illegal activity to Concord Schools' students by a lay coach is unacceptable.”