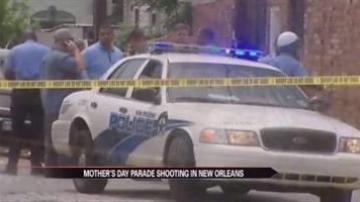 NEW ORLEANS — Police in New Orleans are searching for three suspects after shots were fired at a Mother's Day Parade. Police say 19 people were wounded, including a 10-year-old boy and girl.

The shooting happened just before two Sunday afternoon during a parade.

No one was killed in the shooting and most of the wounds are not life-threatening according to police.

Officials have said the shots were fired with different guns.

"It appears that these two or three people, for a reason unknown to us, started shooting at, towards or in the crowd," said Police Chief Ronald Serpas. "It was over in just a couple of seconds."

Police say they are not sure whether certain individuals were targeted or if it was a random shooting.

Witnesses have only been able to give a description of one of the suspects.