Attorney pleased with not guilty verdict in murder trial 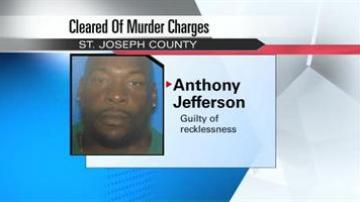 SOUTH BEND, Ind. -- Anthony Jefferson's attorney is pleased his client was found not guilty of murder or attempted murder in a four day trial that ended Thursday.

Jefferson was convicted on only the lesser charge of criminal recklessness.

His attorney, public defender Phil Skodinski, says it couldn't have gone any better.

"Very happy with the verdict. It doesn't happen very often you get a not guilty verdict in a murder case, but it wasn't unexpected. I thought the evidence was there," said Skodinski.

The jury found him not guilty of murdering Jason Reid and attempting to kill Tyreece Walker in September 2013.

Skodinski says his client is not violent.

"He really is a calm person, even though-and he has said before that sometimes people stereotype him as a mean angry kind of person because he's so big. He's 6'8" and 300 pounds," said Skodinski.

Skodinski says his client's story was consistent throughout, but the main witness, Walker, kept changing his story.

"He admitted to police initially when he was in the ambulance to Officer Taylor, he told him one thing and then he overheard he was a suspect, then he changed his version of what happened," said Skodinski.

Skodinksi says he thinks a few other key facts convinced the jury to acquit Jefferson of murder and instead charge him with recklessness.

He says the robbery motive didn't hold up.

"You always wonder why the crime was committed and here there was nothing taken. Both the victims had money in their pockets and there apparently was nothing stolen from the house," said Skodinski.

Jefferson isn't in the clear yet.

He still faces another trial for two counts of robbery and two counts of confinement for allegedly forcing a woman to withdraw $200 from an ATM, then forcing her to drive him to another location. He then allegedly went to a 7-Eleven, threw coffee in the clerk's face and demanded money and cigarettes.