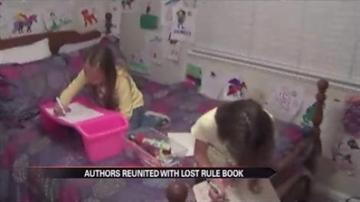 The ten and eight-year-old cousins who co-authored a rule book that was left at Walmart and received national attention, got their book back.

Don't bite the dentist. Don't color on people. It's all part of a new rule book written by kids.

The ten and eight-year-old authors are cousins and never meant for anyone to find their book of rules. But they accidentally left it at a Walmart and word that two very honest children penned it, quickly spread.

There are 157 rules in total and they came up with it when they had to deal with disobeying siblings.

"I said why don't put the rules I here and whoever breaks it has to sit at the door for five minutes and so we came up with all these good rules," said Isabella Thordsen, eight-year-old author.

The book was returned to them after gaining national attention and now the two budding authors might get a real book deal to share their rules with other kids.