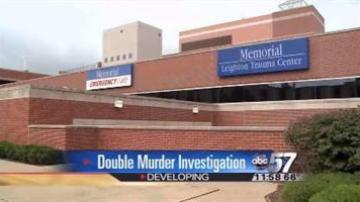 SOUTH BEND, Ind. -- Autopsies were performed on two men who were found shot early on Sunday.

One woman was questioned by detectives on Monday afternoon.

Police said that 21-year-old Kalyn Farmer was rushed to Memorial Hospital after being shot in the chest.

They said a woman dropped him off and police are now talking with her.

As investigators tried to piece together what led to Farmer's murder, they found the body of 22-year-old Mercedes Newbill in a car near Napier and McPherson Streets.

A forensic pathologist ruled that both Farmer and Newbill died of multiple gunshot wounds.

It is not clear whether or not these two deaths are related, but the two men are said to be friends.

Anyone who has information about these murders is asked to contact Metro Homicide at 235-5009 or call CrimeStoppers at 288-STOP.

We will continue to update you as we gather more information on this story.