Bachman throws in the towel 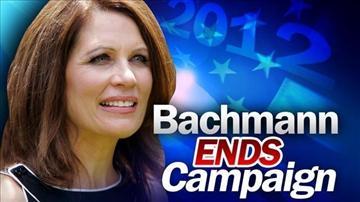 "Last night, the people of Iowa spoke with a clear voice. So, I have decided to stand aside," said Bachmann.

Bachmann came in dead last in the Iowa caucus.

Mitt Romney won, but only eight votes ahead of Rick Santorum, followed by Ron Paul, then Newt Gingrich.

The next stop for the GOP candidates is New Hampshire.

ABC News will have much more on the Presidential race, coming up tonight on World News with Diane Sawyer.