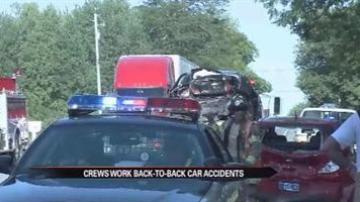 JEFFERSON TOWNSHIP, Ind. -- It was a busy night for emergency crews along the U.S. 20. in Elkhart County.

First responders were called to a three-car pileup near County Road 31 around 4:30 p.m. Wednesday.

Three people were taken to the hospital. But just a half hour later, firefighters responded to a second three-car pileup just a mile down the road.

Firefighters said victims of both accidents were taken to the hospital for head, back and knee pain, but none of their injuries were life-threatening.

“We heard sirens and then 20 minutes later we heard another one,” said Allison Horner.

The sirens Allison Horner heard outside her home were from back-to-back three-car pileups along the U.S. 20.

“We saw a truck being towed off and then we saw a little red car smashed in the back,” said Horner.

“In the first accident there was someone pulling out of the driveway and there were three cars involved and three patients went to the hospital on that one,” said Jefferson Township Fire Department Lt. Marty Simmons.

Simmons was the first on the scene of the first crash. He said they had finished cleaning up the smashed cars when they stumbled upon another accident.

“We were leaving that one and we rolled up on this one,” said Simmons.

This time, he said the second accident had more to do with heavy traffic.

“The pickup truck rear-ended a car and it just caused a chain reaction collision," said Simmons.

But there was a problem, two people needed medical attention, but there were no ambulances available because of the first car crash.

“Ambulances were already at the hospital so we had to get mutual aid from other fire departments,” said Simmons.

Luckily the Middlebury Fire Department stepped up to help. Simmons said he is grateful.

“It is a great thing to have mutual aid from all over the county.”