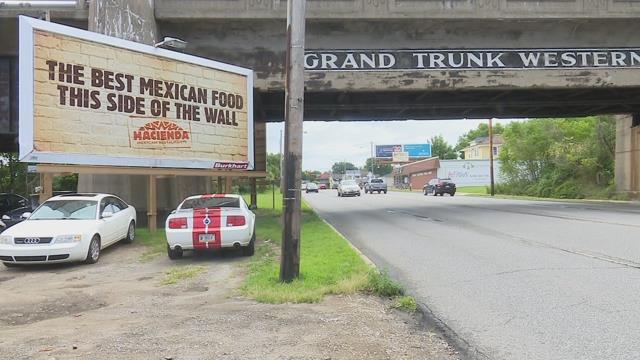 It all started when Hacienda put up several billboards in the South Bend area.

The billboards read, “The best Mexican food this side of the wall,” in a reference to Donald Trump’s “build a wall,” rhetoric.

Hacienda, a Mexican chain restaurant, has since announced they’re removing the signs, but the message has already spread nationally.

Sam Centellas, executive director at La Casa de Amistad, was one of many community members to publicly denounce the signs.

“It’s about this divisive rhetoric in our country and a local company playing into that,” Centellas said.

One explicit, anonymous voicemail says, “You come in this country the right way, not by running over the borders and expecting us to feel sorry for your nasty a**. OK? I’m for Donald Trump and I’m for Hacienda.”

While none of the messages have explicitly threatened the community center, Centellas says his staff is concerned with the language used.

“We’ve gotten a series of very nasty phone calls and voice messages, calling us all types of names and generally proving the point we were trying to make, that this is a challenging sign,” Centellas said.

“We understand and realize and have experienced that when you use humor you’re not going to please everyone, but at this level of concern from the Hispanic community, it makes sense to take them down,” Leslie said.

Centellas says the conversation will continue.

Although his organization has received majority of the backlash, Centellas says it’s worth it to raise awareness and encourage a dialogue.