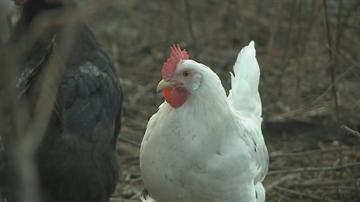 SOUTH BEND, Ind. – A campaign is underway to pass an ordinance allowing people to raise chickens in their backyard within South Bend city limits.

Since 2009 the South Bend Urban Chicken Alliance has conducted the campaign; Karen Shulte-Coman is part of the board of the alliance and has become the unofficial head of the movement.

“Our family has always gardened and this just seemed a logical next step as far as feeding our family, we'd get fresh eggs that are organic," Shulte-Coman described.  “We’d be able to have a nice cycle in our yard of fertilizer.”

The chickens are known to be good for lawns, their waste serves as a fertilizer and they eat problem bugs and plants.  Backyard chickens, also known as urban chickens, have become a big trend across the United States in recent years.  Raising chickens is seen as a way to teach people to provide for themselves, increase interest in organic foods and help the environment.

“It's becoming the in thing and might even attract people to South Bend," Shulte-Coman explained.

“We’ve talked to a lot of other cities, Evansvilles, Bloomington, we’ve tried to check with cities similar to South Bend,” Shulte-Coman explained.

The alliance has met with South Bend Mayor Pete Buttigieg, Shulte-Coman said Buttigieg is very open to the idea.  Buttigieg even took to his Facebook page to ask for citizen’s opinions on urban chickens in February, reaction to the mayor’s question were mixed.  There are a number of concerns that have come up regarding noise, smell and health concerns.

"We're not asking for roosters, and so roosters are the noisy ones and we're asking for small flocks, with daily cleaning, which is easy in a small coop,” she explained.  "When you have a small flock and you're keeping things clean there are absolutely no health issues."

Under the proposed ordinance, those wanting to raise chickens would pay a $20 fee that would go to the city, be subject to restrictions on their coops and have to regularly clean the chicken coops.

The South Bend Urban Chicken Alliances hopes to have their ordinance approved by the Area Plan Commission in May.  They hope the South Bend Common Council will consider and vote on the issue in June or July.