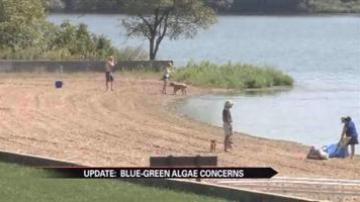 NORTH LIBERTY, Ind. -- ABC 57 has been keeping you informed about the blue-green algae (cyanobacteria) levels in Potato Creek's Worster Lake.

IDEM has been testing the water for the count level biweekly. Monday we learned the bacteria count is more than 10 times higher than what the Indiana State Department of Health needs to see to deem the body of water a high count alert.

On Labor Day, ABC 57 went back to the park to see if the DNR was doing anything different to notify their visitors about the potential dangers of being on the (WHO) World Health Organizations high count alert list and they were not.

The park had a two-sign posted in the entrance area leading to the bathrooms warning about the potential dangers of people coming in contact with the bacteria, and the other included information about why your dog is not advised to ingest the water at this time. The noticed failed to state that the blue-green algae can be deadly.

ABC 57 spoke to Patricia Orabuena and her husband who are vacationing at the state park from Tennessee. They were pretty upset to read the information that is posted on Potato Creek State Park's website after the fact that their two pug-chihuahua mix dogs were already in the lake and one of the dogs drank the water.

"The dog beach should be closed if there is a high blue green algae count, because number one, the state will lose a lot of money if there's a lot of lawsuits," said Orabuena.

Orabuena was so concerned after we showed her a copy of the warning on Potato Creek State Park's website she collected her own water sample from the lake with her emptied water bottle. She said she took the water, "just in case something happens to my pug-chihuahua mix and I have to take her to the vet, I want to be able to prove to them that this was what she ingested."

Kaleigh Manning visiting from Mishawka didn't know anything about the high count alert even though she did visit the restroom while she was at the park she apparently didn't see the sign in the entry way. She said she just adopted her German Shepherd mix, "she's a young dog so maybe her immune system may not be up against something like that."

She thought the park staff should put out more notices so visitors like her have a better chance of seeing the warnings.

Veterinarian Dr. Chris Payton of the Western Veterinarian Clinic on State Road 2 said even though blue-green algae cases are hard to diagnose, he advises pet owners to play it safe and follow state guidelines which recommends keeping their dogs out of the water.

This is the last testing sample IDEM will be reporting on for the year. After Labor Day, Potato Creek's Worster Lake is considered closed for the season.