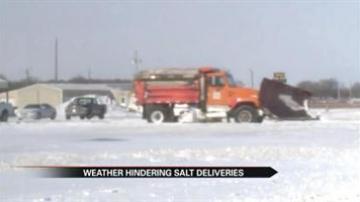 MARSHALL COUNTY, Ind. -- Some Michiana counties are already running out of salt for the roads because of the extreme weather so far this winter. Marshall County says it is running low on salt and the weather is making it difficult to get salt shipments from their distributor.

Marshall County was expecting to get 50 tons of salt this week, but now that's not likely.

"We were supposed to get that at about any time but with the weather we had it's hard to tell. Plus everyone else is in this situation that the tonnages are used up and the supply is not there," said Neal Heck, Marshall County Highway Department Superintendent.

Cargill salt based out of Minneapolis supplies Marshall County with its salt-and they say they're having a hard time keeping up with deliveries because of the constant snow fall and bad road conditions.

"This is going on across the snow belt, which is we're seeing a number of our customers having gone through all of their supply and needing to restock all at the same time," said Mark Klein of Cargill Salt.

Heck has even called other salt suppliers to try to pick up the slack.

For now, crews will just have to wait until it warms up and roads clear to get their delivery.

"We apologize for this but it's the way the winter is going. The people that run the road departments in your area and across the snow belt are focused on making their drivers safe and so are we," said Klein.

In the meantime-Heck says they will use a salt and liquid mixture to de-ice the roads.