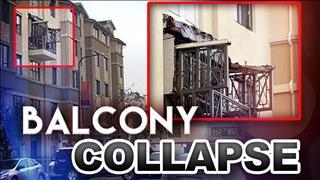 Early Tuesday morning, six people were killed and seven others injured after a fourth floor balcony collapsed near the University of California-Berkley.

Several young people were packed onto the balcony when it snapped and collapsed.  The gathering was for a 21st birthday party at the Library Garden Apartments, two blocks away from UC Berkley.

According to police, 13-14 people were on the balcony at the time of the collapse, and many were taken to the hospital with serious injuries.

Neighborhood residents say the party was loud, and those on the balcony may have been jumping up and down.

The victims are reportedly part of a group of Irish citizens in the United States on a temporary work visa.

“It was a shock. Everyone's thoughts are with the family back home. It was horrible,” says student Dan Sullivan.