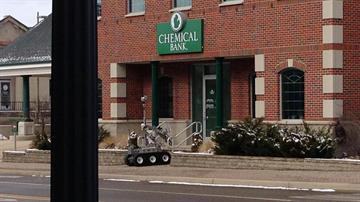 BERRIEN COUNTY, Mich. -- The Berrien County bomb squad responded to the Chemical Bank in Niles after a robbery suspect told a teller she left a bomb on the side of the building.

“We watched a bunch of police officers and cars come up and block the street and we didn't' know what was going on at that point,” said Kelly Shau.

Shau works right across the street from the bank.

"We figured it was a bank robbery but with the bomb squad there then we got a little nervous, worrying that something crazy was going to happen,” said Shau.

According to police an unknown white female entered the bank around 11:30 Friday morning and passed a note to a teller demanding money.

The teller complied and the suspect indicated that there was a bomb on the drive through side of the bank.

"We've checked the drive thru side of the bank, there is no indication of a bomb. However there is a package or a bag in between the exterior and interior doors on the main street side of the bank. That's why the bomb squad was called in,” said Jim Millin, Chief of Police for the city of Niles.

For two hours, the Berrien County bomb squad maneuvered a robot to open the doors and evaluate the package.