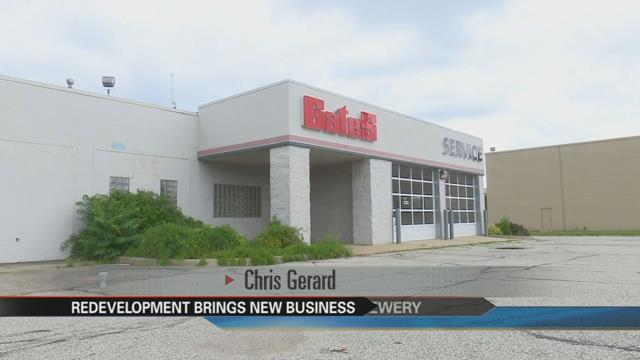 “We like everything that’s going on downtown. We’ve been looking at some stuff down there for quite a while,” Bare Hands owner Chris Gerard said.

When Gerard saw the old Gates service building across from Four Winds Field, he knew he’d found the one to expand his Granger brewery.

“It’s got a lot of cool areas with high ceilings and stuff like that where we can kind of expand our production and have room to do what we want there and also the infrastructure is right for what we wanted to do,” Gerard said.

Bare Hands will still keep its tap room in Granger, but Gerard says expanding to downtown South Bend has always been the goal.

The downtown area is rapidly changing.

The Gates building is across from Four Winds Field

Andrew Berlin, a developer and owner of the South Bend Cubs, is also bringing new business to the area with plans for new apartments.

Berlin says he’s thrilled other businesses are moving toward the area as well.

“That’s always been the dream for the last five years, to be able to attract business to that area because bringing the population to that area really makes a big difference,” Berlin said.

Bare Hands officially closed the deal with the city Thursday morning to buy the building for $1.

Next up is licensing, and then reconstruction.

“We’ve got some licensing we have to go through, specifically the federal licensing, which often takes quite a bit of time so it’s going to be a little while before we have anything definite,” Gerard said.

Gerard says the development is happening faster than he’d expected, and the expectations surrounding new businesses in the area are high.

“We’d like to get in there and keep people happy get our product out to them,” Gerard said.