Baroda man who lost wife, sister in Kalamazoo shootings speaks to honor them 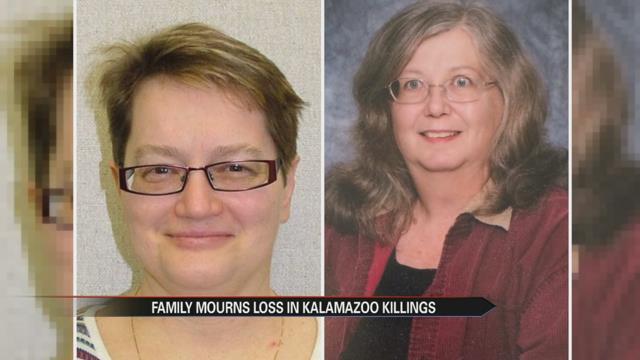 Chris Nye of Baroda, Mich. lost his wife and sister in the Kalamazoo shootings.

“She hadn’t called, hadn’t called,” Nye said. “So about 12 o’clock, I started trying to call her, [but] all I was getting was voicemail. And I tried to call my sister’s phone and got the same thing.”

Nye could not get in touch with his wife or sister Saturday night after the two went to see a show at Western Michigan University in Kalamazoo.

Nye’s wife had told him she would call to let him know when she was on her way home back to Baroda, but the call never came.

“All of a sudden I start reading about what happened [in Kalamazoo], and just had the fear,” Nye said.

That fear soon became reality because Nye’s wife did not come home Saturday night. He soon realized the reports he was reading of random shootings in Kalamazoo may be why.

Early Sunday morning, a Michigan State trooper knocked on his door to confirm his fears.

“I was half prepared for it because of what I had seen [in the news],” Nye said. “I didn’t want to know it was true. I was hoping she was gonna tell me [my wife] was the one that was injured, but then I found out that both my wife and sister were shot [and killed].”

“My wife and sister were roommates in college,” Nye said. “I was in the Air Force and it was decided, they decided they were gonna come up and visit me one weekend.”

That visit was how Nye met the love of his life. And after calling Mary Lou and asking her on a date a few weeks later, a relationship spanning 40 years began.

“Well, let’s put it this way, we met the last weekend of February and we were married the twentieth of December [that year],” Nye said.

Mary Lou, who went by “Mary L,” was a retired office manager with the Michigan Secretary of State.

Nye said she loved to read, knit and garden. He also said she most recently spent time working at a daycare center in nearby Bridgman.

When asked if she enjoyed working at the daycare center, Nye said, “Oh yeah, especially the baby’s room.” He added that she loved kids.

Mary Jo Nye was a retired school teacher who had become popular working at a high school for students with troubled backgrounds in Battle Creek, Mich.

Nye said his sister was engaged to be married for the first time. He added that she loved to sew and that she was the definition of a “people’s person” who was loved by her big family back in Baroda.

“She was everybody’s favorite aunt,” Nye said of Mary Jo. “She was always there to help you out.”

His sister and wife’s suspected killer was charged with six counts of murder Monday afternoon, but Nye said he doesn’t plan on attending many of the court hearings.

Instead, Nye will spend time remembering the road trips he and his wife often took in their RV and the special bond he shared with his sister, who was one of his siblings.

When asked how he wants his wife to be remembered, Nye simply said, “Loving.” And when asked the same question about his sister, Nye said, “Caring.”

Funeral arrangements have not yet been made, but Nye said his family is hoping to have a joint service so his wife and sister, who were best friends for decades, can rest in peace together.