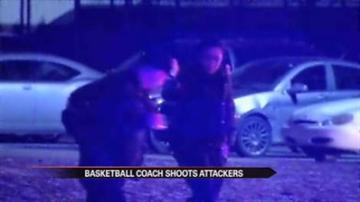 DETROIT -- A high school coach in Detroit shot two men who attacked him on Friday night.

The girl's basketball coach was walking two players to their cars in the school parking lot when two men allegedly approached them with a gun and grabbed the coach's neck.

The coach then pulled out his own gun and shot both of them. One of the suspects died, the other is still in the hospital.

The 70-year-old coach is reportedly a reserve police officer.