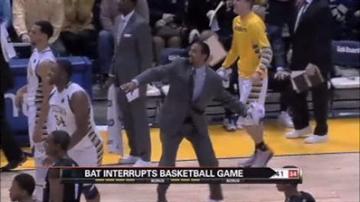 MILWAUKEE -- During the middle of a Marquette University basketball game against providence, players were spooked by a bat that started swarming the court.

Players and coaches tried to throw towels at the creature to knock it out of the air. You can see the bat kept making its rounds, so they dimmed the lights in the arena.

No word on if they caught they bat, but they did resume the game.