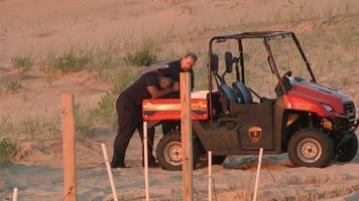 MICHIGAN CITY, Ind. -- Some are calling it a miracle on Mount Baldy. A 6-year-old boy was trapped 11 feet underground after a sand hill he was standing on collapsed beneath him - and after several hours was rescued alive.

"I've been here since 1991; I've never heard of anything like this," Bruce Rowe, a ranger with the Indiana Dunes National Park, said.

Emergency responders dug for hours, unsure if that child would still be alive when they found him.

Then, suddenly, the excavation machines stopped and the boy was loaded onto an ambulance. Firefighters on scene said he was still breathing.

Some of them, overtaken by emotions, wept.

Saturday, beachgoers are glad to hear of his rescue, but wonder if this ordeal could've been prevented.

"He's a kid, he's going to wander," Kimberly Cahalan, a visitor from Chicago, said. "I mean, my son wanders all the time, so you just have to watch them."

The area where the boy fell was roped off, but unless a ranger happens to be nearby, there's little to keep people from crossing it.

Officials with the park said grass is being replanted in an effort to stabilize the dunes.

"We're keeping the visitors off of it as much as possible, so that those plants have a chance to re-grow," Rowe said.

"I realize it's just a freak accident," Vadim Shinkevich, a visitor from central Indiana, said. "It wouldn't change my mind about coming to the beach at all."