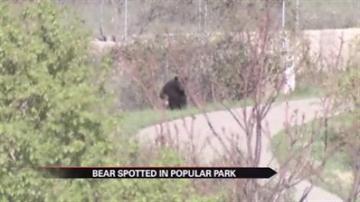 MUSKEGON, Mich. -- The Muskegon Police Department wants to warn residents to stay away from the bear that was spotted Monday.

A man spotted a bear on his morning walk forcing officials to close a popular bike path.

Right now the bear is in a fenced area along Lakeshore Drive.

A fisherman says he also had a close encounter with the bear on Monday.

"I was fishing here on the dock, I heard something behind me.  I looked behind me and there was a black bear.  It ran right by and I went to get my phone so I could get a picture of him.  And when I came back, he was actually swimming in Muskegon Lake," said Scott Shelagowski.

The DNR hopes to shoot the bear with a tranquilizer dart and move it somewhere safe.

They say the bear weighs about 200 pounds.