Behind the scenes at the National Weather Service 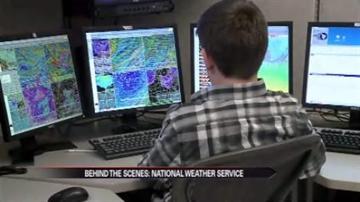 SYRACUSE, Ind. -- Twenty four hours a day, seven days a week, meteorologists at the National Weather Service are tracking the weather. During the winter, that also means calculating the snowfall.

There are two National Weather Service posts in Indiana. One is near Syracuse – and that’s where ABC57’s Emily Pritchard got a behind the scenes look at their operation.

Outside-just a few steps away from the Doppler radar -- in their observation space, meteorologists like Nick Greenawalt work hands-on.

They're keeping track of three main elements with snow.

First-- how much new snow falls every six hours.

"Generally we measure off a snow board, it’s just a white plastic board,” said Greenawalt.

They take multiple measurements and use the average.

Then Greenawalt measures how much snow has accumulated on the ground, which is always rounded to the nearest inch.

It is usually less then the added--6 hour totals-together because of compaction.

Then, every day at the same time across the world, in Indiana at 1 p.m., meteorologists take samples like snow cores. It’s the same way they measure precipitation in the winter.

"We get a liquid value of what's in the snow so river forecasts their models can put that into the models,” said Greenawalt.

This helps to monitor the risk of flooding.

They collect the snow and take it inside.

Measure a funnel of hot water, add it to melt the collected snow and calculate the difference.

"So we know that the snow core is 3 tenths water equivalency,” said Greenawalt.

They don't just collect these measurements for the record, the information also helps them tweak their forecasts.