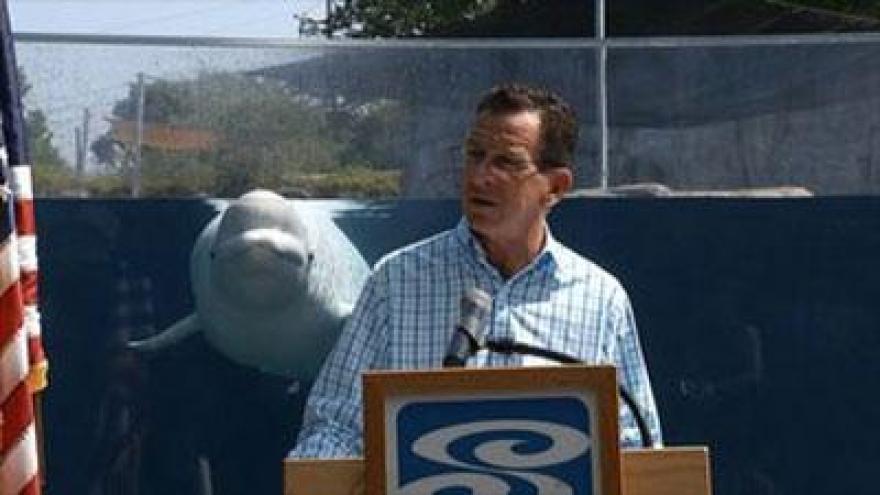 Mystic, CT -- The governor got photo-bombed by a sea creature on Wednesday while promoting tourism at the Mystic Aquarium.

During his press conference, Gov. Dannel Malloy said tourism is a $14 billion industry in Connecticut, which employs almost 120,000 people.

"It is 5.4 percent of our workforce. If combined with forms of hospitality, it goes up more significantly," Malloy said. "We have to constantly remind those market places that were in competition with is that we're here and on the map. And [we] have great facilities like this one as well as great educational institutions."

The governor said they are seeing increased amounts of visitation from Massachusetts, New York, Rhode Island and Pennsylvania.

"We're ahead of where we were this time last year by surveying 23 attractions. Their attendance is up 5.1 percent year over year," Malloy said.

That increase comes after a bad winter, Malloy said. Hotel overnight stays were up substantially with spending up 4.4 percent from last year. Hotel occupancy in southeastern Connecticut was up 9 percent.

"[Interstate] 95 should be extended by a lane in its entirety. I believe that to be the case," Malloy said. "If we don't do it, it will be an impediment to growth in this portion of the state and southwest Connecticut."

Malloy said advertising does pay and it is the best thing we can do.

There are 700,000 visitors annually to Mystic Aquarium. As the Labor Day weekend and last traditional weekend of the summer, the governor said tourism should remain strong.

"You've been watching the whole time. I was offered an opportunity to pet it, but I declined," Malloy said. "So it's pretty neat. Beluga whales three of them. I got a compliment with respect to treatment of mammals."