Benton Harbor Commission and EFM on the same page? 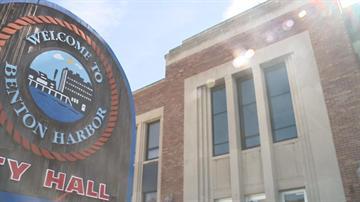 Harris held six hours of meetings over the past week with several elected officials. The city commission had passed a resolution 5-4 in opening a dialogue with the EFM.

The struggle between Harris and city officials has been a public one since Harris was appointed by the state to control Benton Harbor’s finances under Michigan Public Act 72, and later Public Act 4. Muhammad was in the majority of commissioners opposing state control of the city’s finances and fighting to get Public Act 4 repealed.

Now Muhammad is one of those trying to find common ground. “A bee can’t make honey and use its stinger at the same time.”

“Some commissioners may never be on the same page,” said Benton Harbor Mayor James Hightower. “But by and large, I think, the majority has come to grips with the fact that we have to move this city forward.”

“My discussions with the commissioners were exploratory to discuss my plans and receive their input,” Harris told ABC 57 News in an email Wednesday.

Harris’ plans include a 5-year deficit elimination plan and an application for a $7 million loan from the Michigan Department of Treasury. The loan is part of House Bill 5566 that provides low interest loans to struggling cities. If accepted, it would eliminate Benton Harbor’s deficit and pay off debts to vendors and pensions.

“It would be a game-changer for the city,” said Hightower, who likened the loan to paying off credit card debt with a student loan. “This bill was actually created with Benton Harbor in mind.”

Hopes are now that with communication lines open and a common goal, to fix Benton Harbor’s finances the end of state control could be close. “Interest is what brings people together and right now the major interest is to restore power to the residents,” said Muhammad.

The commission is working to have power restored in Benton Harbor by January of 2013.