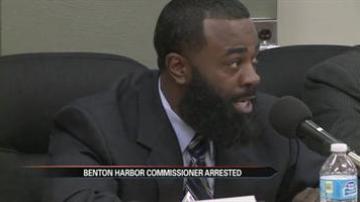 "I was approached and ambushed by at least six to eight officers, as if I were the man they were searching for on a manhunt, armed and dangerous." Commissioner Shaw said.

Shaw says there is no doubt in his mind police had an ulterior motive when they arrested him.

"I was politically profiled and excessive force was used by the arresting officers, who were all white," said Shaw.

But police say Shaw was being loud, disorderly and confrontational outside of a nightclub on Pipestone early Saturday morning.

In the meeting, Shaw did not address those accusations directly.

But he did say officers unjustly treated him like a fugitive.

"Completely unnecessary, it should have been resolved in a different way," said Commissioner Shaw.

"I do question the way the police have been treating our citizens," said Commissioner Trenton Bowens.

Bowens even suggested the suspended police chief should be reinstated.

"Roger Lange should be brought back as police chief immediately," he said.

And Commissioner Marcus Muhammad says it is no secret that there is tension in Benton Harbor over a controversial tax proposal residents will vote on in November.

Commissioner Shaw is waiting for his court date. For now, his standing on the board of commissioners will not change and he is asking for privacy during throughout the process.