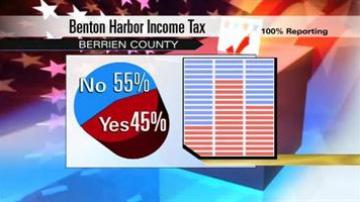 BENTON HARBOR, Mich. -- For months the city of Benton Harbor has been at odds. Two sides battling against each other over a city-wide income tax. One group in favor of it, the other, against it.

The tax was on the ballot Tuesday and voters rejected it by a slim margin. 667 people voted no, and 543 voted yes.

The tax would have charged residents and business owners 1-percent of their income and people who work in Benton Harbor would have been hit as well, with a .5 percent tax.

Once the results were in ABC 57 talked with Mayor James Hightower who was against the tax, and Commissioner Marcus Muhammad who was in favor of it.

"For the tax to be voted down, I’m almost lost for words, but I just have to say that the citizens of this community have spoken and I think they really saw the tax for what it was. Everyone that was out trying to pass this and those that tried to prevent it, I believe all have Benton Harbor’s interest at heart but we have to figure out a way to put it all together so we work together," expressed Hightower.

"I am grateful that the residents came out in such large numbers, it was a healthy debate. Maybe if not this time, perhaps in the future, the next generation could possibly see that a city income tax would good for Benton Harbor at that time," said Muhammad.

ABC 57 talked with one business owner who said he is very relieved that the tax was voted down.

Commissioners were also elected on Tuesday for four year terms: Juanita Henry won for the third ward, Ruthie McCoy Haralson won for the fourth ward, and Marcus Muhammad and Duane Seats are the commissioners at large.