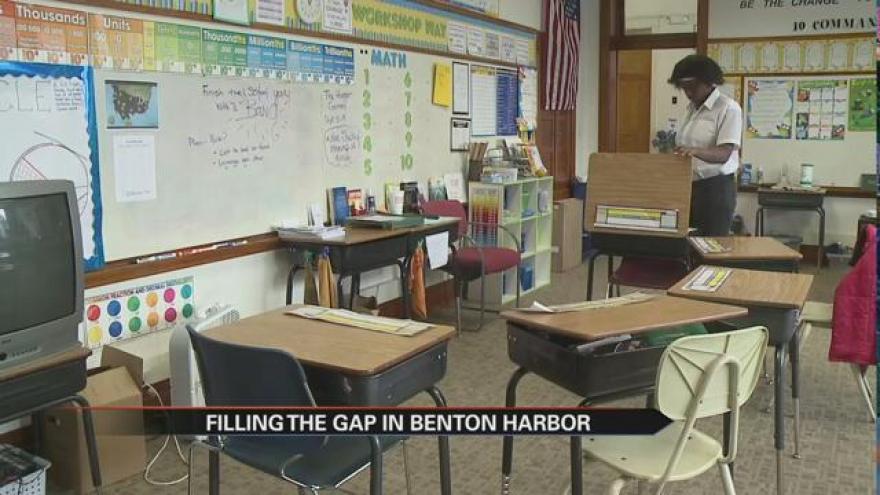 One non-profit is filling in the gap to educate middle school girls after finding out there are low graduation rates in Benton Harbor.

The Benton Harbor Girls Academy is looking for monetary donations so they can expand their program after its recent success in the community.

Tiara said, “At the other school I went to, there were boys there and I got distracted. But being here you can just have girl fun and stuff.”

Tiara had trouble in 5th grade, but she said the same-sex education environment at the Benton Harbor Girls Academy helped her learn the material after she failed the class at another school.

The Executive Director said the Benton Harbor Girls Academy was founded in 2010 and has made large strides in helping middle school girls succeed academically when they may have struggled in other learning environments.

Dr. Patricia Quattrin said, “She had the motivation and she worked on her fifth grade work, completed it all at a very high level by Christmas, went on to do her sixth grade work and finished that by the end of the year.”

Dr. Quattrin said they allow girls to learn at their own pace and through having a multi-grade classroom, the older students help the younger students with their work.

Tiara is now a 9th grader, but she comes back to volunteer.

Tiara said, “I'm thankful that I have people to support me for what I go through. They're very helpful.”

One 7th grader said she hopes to be a news reporter or a doctor when she grows up, and she believes having more time with individual instruction from a teacher will help her achieve her dreams.

Tonetta said, “I like having more help and having a couple of kids in school in the classroom so I can learn better.”

Dr. Quattrin said there have been several success stories which is why she hopes to have 3 classrooms and their own facility one day. Right now they are just renting part of a building from a local church.

Dr. Quattrin said “We need to help these girls before they get in trouble.”

The school operates on grants and donations, if you want to sponsor a girl like Tiara or Tonetta, it's about $7,000 a year.

A teacher said her students are above the national average according to their recent standardized test scores.

Pam Britt said, “The girls have gained two academic years. So they increased by two years so that was very exciting for me.”

If you would like to sponsor a student, or donate to help build a school, you can visit their website http://www.bentonharborgirlsassociation.org/