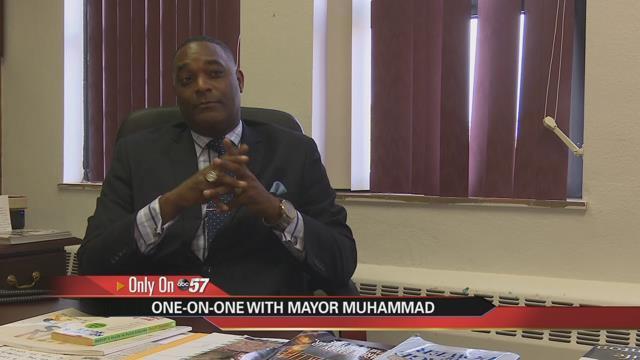 After meeting with Michigan Gov. Rick Snyder to discuss the current state of his city, Benton Harbor Mayor Marcus Muhammad sat for down an exclusive interview with ABC57’s Taylor Popielarz.

“We started out in intensive care, we’ve been stabilized, and we have been released,” Muhammad said.

‘Supervised release’ is how Muhammad describes the current state of his city.

“People, I think, are beginning to say, ‘Hey, we have our government back,’” Muhammad said. “And you know that all politics start local.”

The city lost its right to govern itself in a financial emergency in 2010.

What followed was six years of state control, that ultimately ended this past July; a milestone for any Michigan city.

“Benton Harbor’s the first city that has gone through the entire process and has now began to walk on its own two feet,” Muhammad said.

But Muhammad is continuing to work with the governor and state officials in a growing partnership.

“When [Gov. Snyder] and I met, the focus was not politics, the focus…was on good government,” Muhammad said.

The mayor said, during their 30-minute meeting, he and the governor talked about housing, education and ways the city can continue to grow financially.

Muhammad said his priorities are continuing to rebuild a healthy city hall filled with trusted leaders, and increase the city budget to upgrade a crumbling infrastructure.

Though the city has paid off a number of debts, and has about $1.6 million in a reserve fund for the first time in years, Muhammad gives his city a modest grade for financial health.

And his grade for Benton Harbor Area Schools?

“An incomplete,” Muhammad said, explaining the district needs time to adjust to its new superintendent, new high school principal and a fairly new consultant who is overseeing the priority schools for the state.

Muhammad said he and the governor discussed restructuring state-shared revenue so cities like Benton Harbor can find new, creative ways to keep bringing money in, while providing quality service to residents at the same time.

As for additional goals he has for the rest of his first term in office, Muhammad said he wants to help upgrade the city’s water department and raise enough funding to actively repair infrastructure problems as they occur.

Muhammad said he hopes to continue showing residents tangible results of their tax dollars going to work – like repairing a sidewalk or cutting down a dead tree.

As for community-police relations, Muhammad said they continue to improve in Benton Harbor, but he is working with other city officials to hire more officers who actually live in the city; in hopes that will make the officers more relatable if they live in the community they serve.

Regarding Benton Harbor Area Schools, Muhammad said he told Gov. Snyder how much of a negative impact closing or dissolving Benton Harbor High School would have on the city. Muhammad stressed that there is no current indication that the state will shut any Benton Harbor school down, but he said because the high school and the MLK S.T.E.A.M. school are ‘priority’ schools being monitored by the state, he wanted to bring it up with the governor.