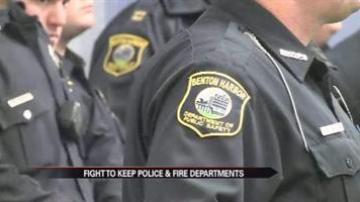 BENTON HARBOR, Mich.-- The crowd got rowdy at the Benton Harbor public hearing. Residents took the podium and gave opinions on whether or not to keep the police and fire, or turn it over to the county to save money.

The room was packed as Benton Harbor residents took turns giving their two cents at the podium.

"Benton Harbor's been dying on the vine for decades," said Benjamin Clark, artist.

Benton Harbor's financial emergency manager says costs still exceed revenues. Shifting police and fire to the county can save money, but they still need a paycheck. Some believe nixing police would be a grave mistake.

"With the amount of call volume we have and the way that our police department runs, it would be a crime ridden city," said Wes Smigielski, vice president of Benton Harbor Police Union.

The police department responded to nearly 13,000 calls in the past year. Violent crimes are down 61 percent. Because of the improvements, many residents say they need to find another solution since losing police and fire isn't one.

"They're the glue, not only police and fire but public works," said Jonathon Koch, Benton Harbor business owner. "Everybody as a whole, it's very important."

The other options: schedule another election to reconsider the Nov. 6 vote, file for bankruptcy or levy a public safety special assessment. But that will cost them.

But business owners are still holding out- saying they can't take the tax hit.