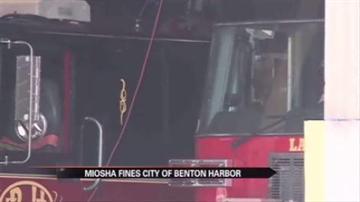 BENTON HARBOR, Ind. -- After a detailed investigation into the fire that injured Benton Harbor firefighter Lieutenant Doug Bell, MIOSHA is hitting the city with fines that total $7,500, saying the Public Safety Department did not handle the situation properly.

Two in, two out, federal agencies say that’s the law. Anytime firefighters respond to a burning unit, two are supposed to run in, while two wait outside. The investigation determined that in March, when Lieutenant Bell got trapped inside of a burning house, that procedure was not followed.

Now the city must pay thousands of dollars.

But some say that is not enough punishment.

"A firefighter was almost killed and is now permanently disabled and that’s all they got was a $7500 fine," said Mark Docherty, President of Michigan Professional Fire Fighters Union.

The emergency financial manager, Tony Saunders, released a statement regarding the holes in the public safety department.

“While, these issues , which concern basic elements of public safety such as organizational structure, training, and equipment, have accumulated overtime; we have already begun to address many of these deficiencies.”

But the firefighters union says the only way to fix this problem is to return to a fully employed fire department; cross training police to be firefighters sets everyone up for failure.

"They do not work, they do not save money, they risk people’s lives and that’s what you're seeing in Benton Harbor," said Docherty.

People who live in the city are concerned.

"I don’t know where they will get the money from with the poverty going on in the city like this," said Benton Harbor resident Mark Allen. "There should be more firefighters, there was not enough out here that night, and that just wasn't right."

The statement released by Saunders ended by saying its clear that the city needs to do more and will do more.