Benton Harbor School Board president explains why she resigned 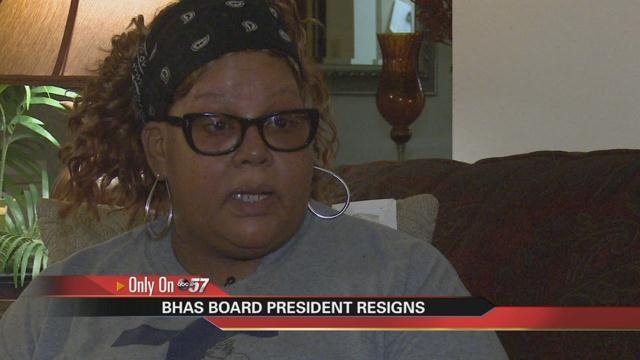 Benton Harbor Area School Board President Sharon James resigned Monday, and spoke only to ABC57’s Taylor Popielarz about why she decided to step down.

“I could not help our children anymore, and I regret that because that way my goal,” James said in an interview Wednesday afternoon.

She said big changes within the Benton Harbor Area School District led her to decide to resign Monday, after months of speculation.

Those claims come in response to a new intervention program Benton Harbor Superintendent Dr. Shelly Walker is starting. Dr. Walker says the program will help keep students out of trouble by addressing red flags early on.

James said the other reason she resigned is because of recent layoffs within the district that cut more than 40 jobs in an effort to save $1 million.

James said she understood most of the cuts, but is frustrated some city-based employees with relevant degrees were replaced by people who don’t even live in Benton Harbor.

“I think it’s important that a community school district have community involved in the school,” James said.

It was first reported by various outlets that James resigned in June when she walked out of a board meeting after allegations that she and a fellow board member got into a fight.

But James told ABC57’s Taylor Popielarz in an exclusive interview in June that she had not resigned, but instead walked out because she didn’t want to create any more trouble.

“I did not resign,” James said in June. “I did not say that I was resigning and I have not tendered a letter of resignation.”

Since then, James has not attended one school board meeting.

She said she needed time to think about the recent changes to the district, and she didn’t want to be seen as a conflict of interest as the board discussed her brother – former Benton Harbor High School Principal Rodger Tripplett – who was placed on administrative leave, for an unknown reason, earlier this year.

“I thought that it was best for me to just stay away until that process had been completed,” James said.

Benton Harbor Area School Board Vice President Joseph Taylor has been acting as president since June.

He said this formal resignation won’t bring about significant changes to how the board operates.

“No changes at all," Taylor said. “We’ll continue to do what we’ve done since June, and that’s lead this district in the right direction for student growth and learning as we try to ‘restore the roar’ for Benton Harbor Area Schools to what it used to be.”

James said the decision to step down was tough, but she saw no other option.

“I love Benton Harbor,” James said. “I love the residents. And I really want to formally apologize to all the voters who went out and voted for me as I was supposed to remain on this board until 2018.”

James added, “And it was my intention to do so. But I cannot help a person murder the lives of our young people.”

The district responded to the comments and critiques made by James with the following statement:

“This is the first time we have heard of any dissatisfaction with our recommendations relative to the hiring process. It is important to note that with all Benton Harbor Area Schools employment matters, the Board of Education makes the final decisions. Ms. James, as a school board member, had the opportunity to share her thoughts with her colleagues and the superintendent to address her concerns as part of the Board of Education’s meeting process prior to the approval of hiring personnel.”