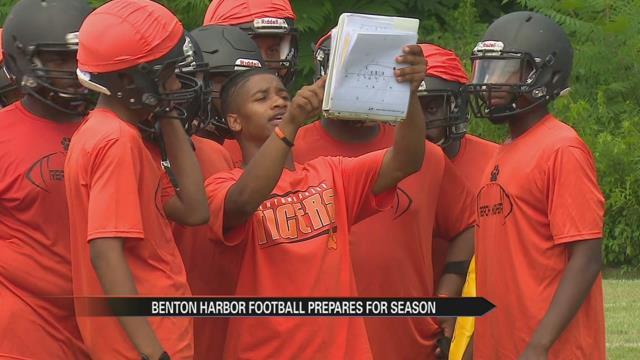 The Benton Harbor Tigers football team is back in action, starting their first week of practice ahead of the 2016 season.

“We show signs of really being good, but we’re not anywhere near a consistent team yet,” Benton Harbor High School Football Coach Elliot Uzalec said.

So practice is underway, as the Tigers look to meet new expectations.

“It’s kind of nerve wracking, but it’s exciting cause we gotta big target on our back now,” Benton Harbor High School Senior George Walker, who plays wide receiver and safety, said. “I know everybody wants to try to beat us now, so it just encourages us to work harder.”

The team is working harder after a fairytale 2015 season.

Last fall, the team earned their first winning record in more than 20 years, and their first state playoff appearance in school history.

“It’s a lot of pressure from last year, but, I mean, I’m really ready for it just for the simple fact that the loss that we took last season, it was kind of devastating,” Benton Harbor High School Senior Christopher Hamler, who plays offensive guard and defensive tackle, said. “But at the same time, we learned a lot.”

Coach Uzalec has worked the boys hard throughout the off season; getting them in the zone for a new year.

“We are definitely trying to shoot higher than last year,” Uzalec said. “I won’t be satisfied with last year’s performance.”

Those high standards are set by the man who became a leader of hope in Benton Harbor last fall, during his first season as head coach.

“It was just an affirmation that we can be successful here at Benton Harbor,” Benton Harbor High School Athletic Director Fred Smith said, speaking of the 2015 season. “And we have good kids, and with proper leadership, they can be very successful. And we’re looking forward to building on it this year.”

While the team is building on the history they made last season, Coach Uzalec is only focused on playing good football.

“Personally, I didn’t want to be in the national spotlight [last year] and I hope I’m not this year,” he said, laughing. “No, it doesn’t add any pressure to me. Just play ball. Let’s go. Let’s let it rip!”

Off the field, Coach Uzalec is also focused on helping his boys improve their grades and stay out of trouble when they’re not in school.

The coach brought in tutors for the team last season, and plans on doing the same this year.

The Tigers’ opening game is on August 26 at Filstrup Field against Marshall.

You can watch ABC57’s documentary on the Tigers’ 2015 season, ‘Restore the Roar,’ here.