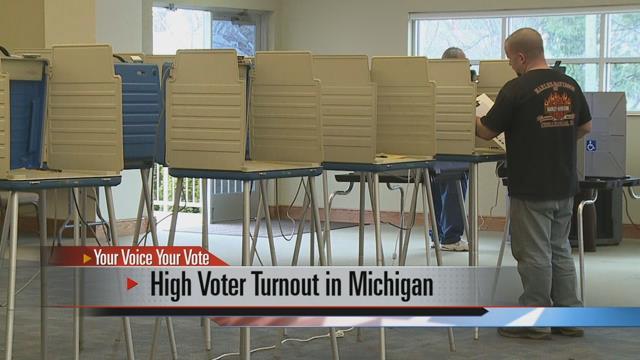 Michigan residents were out Tuesday to share their voices and their votes.

Michiana counties saw hundreds more participate in the 2016 primary election and voters say they’re exercising their right so they can see a change.

“I think it affects everyone’s life even down to the local level,” said voter Melanie Vasic.

“Because without voting you don’t have any say in it,” said voter Jacqueline Kirkdorfer.

Folks young and old in Michiana hit the ballots at higher turnout rates this year compared to past primaries.

“I think it’s a lot more now even with the younger people like me, a lot of us are getting more involved,” said Haines.

Berrien County saw about 3,500 more involved voters than the 2008 primary election and a 600 more compared to the 2012 election.

“People are excited because they know what they want now,” said Paullane Washington, Election Judge Chair.

More voters knew what they wanted in Cass County as well.

“Yeah, we’ve gone through more ballots than we’ve had to in previous years we’ve used more than we have and we’re going to have to start photocopying them,” said Steve Sante, Milton Township Clerk.

Running out of ballots was a problem for one precinct in Berrien County as well.

But outside of that, there were no major issues in these two counties at the polls.