Berrien Co. Sheriffs Office loses one of its own 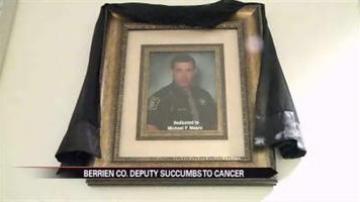 Moore joined the Berrien County Sheriff's Department straight out of the academy.

For the next 13 years he would make a name for himself within the department.

"The way he dealt with others and treated people is a model for many,” said Undersheriff Chuck Heit.

His colleagues say Moore was likable and able to bring a smile to just about anyone’s face.

After he was diagnosed with a rare form of cancer three years ago, he became an inspiration.

"With the way Mike continued to battle that and the way he inspired many, including myself, it was tough to hear, but we know Mike's in a better place,” said Heit.

Moore will never again patrol the roads of Berrien County or keep watch over those in the county jail, but his brothers and sisters at the sheriff's department say his memory will not fade.

Moore was in his mid-30s when he died this week.

A memorial service is scheduled for Saturday at 11:30 in St Joseph, Michigan.