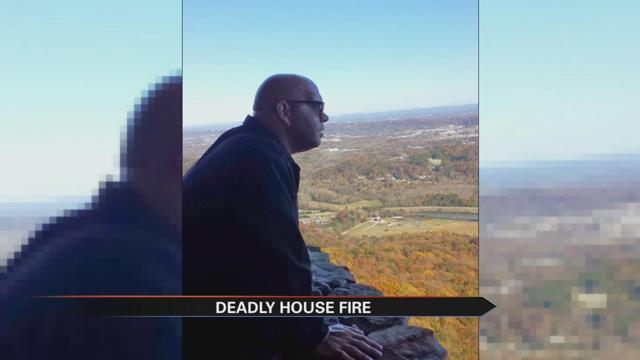 A Benton Harbor business owner died Monday night while trying to rescue his family’s pets from his St. Joseph Twp. home as it burned.

“I was eating dinner, I got a frantic call from Tony’s wife, Gina, saying she needs me to go over to the house right now, that her house is on fire,” John LaRotta Jr. said.

John got the call around 6 p.m. Monday night. He immediately headed to his brother’s St. Joseph Twp. home on Wedgewood Drive.

“When I arrived, I was met on the scene by the officer that was first on the scene and he let me know that my brother didn’t make it,” John said.

Tony LaRotta, 43, died in the fire, leaving his big brother in shock.

“I just talked to him on Saturday,” John said. “I was at his house on Sunday…knocking on the door and he was sleeping. I wanted to talk to him. And just, just, all our memories from when we were a kid til right now just flashed right before my eyes.”

John said his brother was his lifelong friend. They were so close, John trusted Tony with taking over his Benton Harbor auto repair shop, Advanced Auto Repair on M-139, back in January.

“I hinted around to him that I might be selling the place,” John said. “And that’s when he approached me and said that he would be interested in it, and he was excited about it.”

But when a fire broke out inside Tony’s home, everything drastically changed.

Tony and his wife, Gina, were big animal lovers. John said they shared a passion for rescuing strays.

“[They loved] anything to do with homeless animals,” John said. “They would take [the animals] in the house, they would nurse them back to health, they would put them up for adoption; made sure they were going to good homes.”

Tony was home alone Monday because Gina was in Canada on a business trip and their daughter, Sabrina, was away for spring break.

“Tony loved his wife and Sabrina immensely and he knew that his wife loved those dogs,” John said.

So when the fire broke out, Tony managed to get out safely, but then he made the split-second decision to run back in to try and rescue the family’s six dogs and one cat.

“That’s how much he actually loved his wife, and he loved animals,” John said.

Tony and the dogs did not make it. Their cat, Shadow, may have survived, but hasn’t been found.

“I just don’t think anybody could ever ask for a better brother than Tony,” John said. “I’m gonna miss him, along with many other people [who] are gonna miss him immensely.”

John said though he recently sold his business to his brother, he now plans on taking it back over in Tony’s honor.

“My brother would want me to move forward with it,” John said. “Just like, if I still owned it and something happened to me, I would want him to actually take over and keep everything going.”

John said Tony’s favorite hobby was shooting pool and that he loved his wife and daughter more than anything.

An investigation into what caused the fire is still ongoing.