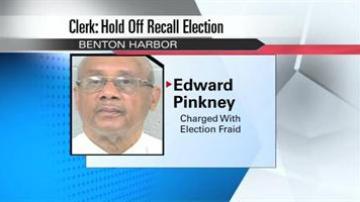 The Berrien County Clerk is asking for the mayoral recall election to be put on hold because of the irregularities found in the petitions that prompted the election to be scheduled.

According to a press release from Sharton Tyler, the Berrien County Clerk, she will be seeking a court order requesting an immediate stay of the May 6 election.

She wants the election to be put on hold until the recall petitions can be examined and until the prosecution of the criminal charges related to the petitions are complete.

Tyler says she wants to maintain the integrity of the election process.

Edward Pinkney has been charged with election law violations related to alleged irregularities in the signatures on the petition.

The prosecutor's office alleges the dates were changed on some of the signatures and some people were allowed to sign more than once and Pinkney affirmed that did not happen.

Tyler is working with the state of Michigan to determine how to proceed because it is such an unusual case.