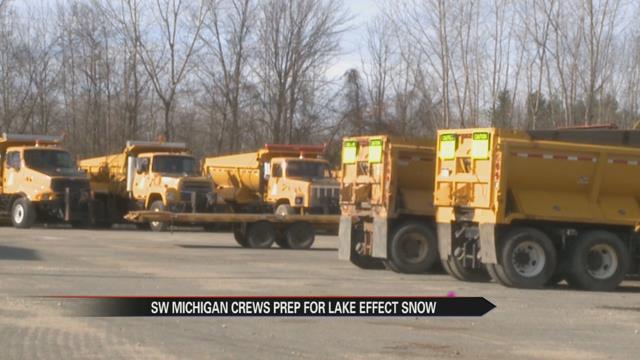 Southwest Michigan is known for getting some of the worst snow and wind in Michiana.

The city of St. Joseph has a relatively small street department, with only a few trucks and employees, but one thing they aren’t lacking is salt.

They keep about a thousand tons of salt as a first line of defense.

If the streets become unbearable, they will start to put out salt.

If the salt doesn’t do the trick, one of two plow trucks are then brought out.

St Joseph has only two plow trucks ready to go because the city is smaller, but they say there is backup equipment and they even have backup employees.

Tom MacDonald, director of Public Works, says the weather can be unpredictable.

“It all depends on how the storm plays out. We usually get a call from the local police department. They contact us and say the roads are beginning to get slippery,” MacDonald said.

The Berrien County Road Commission has dozens of vehicles an almost 50 employees, one for every route.

There’s about 1500 miles of road for the commission to cover.

They use a mix of salt and sand to melt the snow, and heavy duty trucks with blades and plows.

Employees say often, it’s not the snow that causes them trouble, but the wind.

“It’s the combination of the snow and the wind. It’s even the direction of the wind. So what we hope for if we have to have a snow event is no wind, but that doesn’t normally happen,” said Louis Csokasy, managing director of the Berrien County Road Commission

The roads are treated in order by traffic count.

"We’ll be monitoring the weather virtually every hour until the start of the event,” Csokasy said.