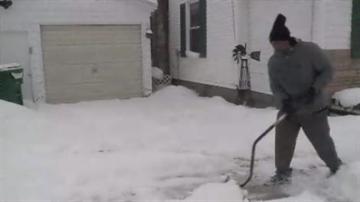 BERRIEN COUNTY, Mich. -- Berrien County residents living along the lake have gotten more than a foot of snow this week. Most of the residents have their own way of dealing with the snow and say they’re more than prepared.

Snow-verload! It's the snow storm that keeps on giving to Berrien County. Residents are sick of it.

"I'm ready for spring. I'm tired of the snow, but it's been a mild winter so we really can't complain,” said Berrien County resident Lloyd Hughes.

Mild by Michigan standards is still a fair amount of snow.

We started our snow-tour in Niles where shoveling is a daily routine.

Byndum says he spends about an hour and a half to two hours shoveling his neighborhood every time it snows.

"A lot of shoveling. In fact we've just been shoveling our driveway and it was quite challenging but we managed to do it,” said Berrien County resident Grace Kaoma.

Fortunately, while folks are digging out their driveways and sidewalks, road crews are clearing the roads-- and so far, the snow isn’t weighing them down.

"Considering how much snow we've had, I think they've done a pretty good job at keeping the roads clear,” said Hughes.

"They're fair. A little slippery, but manageable,” said Kaoma.

MDOT officials say the plow and salt trucks will be out as long as the snow is falling.

Right now the drivers have been on 12 hour shifts around the clock since the 30th and they will continue until the snow stops.

Most of the main roads are just wet and slushy.

Traffic is flowing well on the Bypass and M-139.

Some of the side roads and smaller city streets are still slick though with some packed snow.