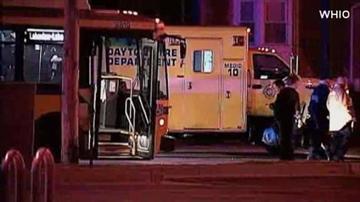 DAYTON, Ohio (CNN) --  Police say two bullets aimed at an Ohio bus driver's chest were stopped by the bible in his shirt pocket.

The driver, 49-year-old Rickey Waggoner, was hit in the leg by a third bullet.

Police say the other two shots jammed into the Dayton bus driver's bible and did not penetrate his chest.

Waggoner had pulled his public transit bus onto the side of the road after it stopped running.

Police say as he was trying to fix the problem a group of guys walked up to him and shot him three times and stabbed him in the arm.

Waggoner was taken to the hospital and is expected to recover.