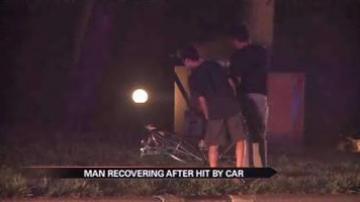 SOUTH BEND, Ind. — A man is recovering in the hospital after getting hit by a car in South Bend.

The accident happened around 12:30 Thursday morning at the intersection of Ironwood and Dunn Street in South Bend.

Witnesses say that the man's face appeard swollen and that he also had a large gash.

"It was crazy. I don't know if he would be alright, but he got up but then they told him to lay back down," said Thaias Burris.

Witnesses say the man appeared to be in his early 20s and that he wasn't wearing a helmet.

The man's bike didn't seem to have any major damage.