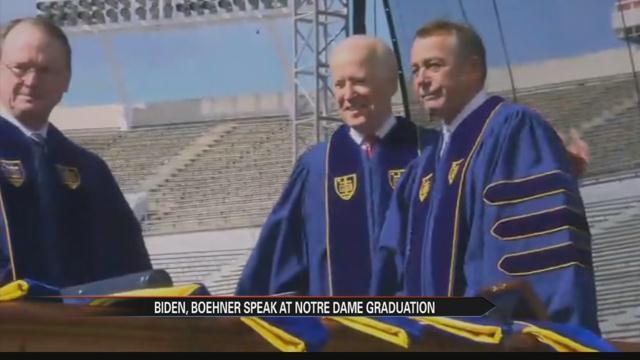 “I can say without the fear of contradiction, it is the most meaningful award I’ve ever received in my life,” said Vice of the United States, Joe Biden.

“We award you, today, the Laetare Medal, not to endorse particular positions you’ve taken or votes you’ve cast, but because each of you have given your lives to serve the common good in political leadership by your own best lights,” said University of Notre Dame President, Father John Jenkins.

Father John Jenkins made clear why Biden and Boehner were awarded the nation’s highest catholic honor despite critics saying the two men do not embody every faith-based virtue the award represents.

“You have each built collegial relationships with those with whom you disagree, even disagree vehemently,” said Father Jenkins.

The vice president and former house speaker spoke to the graduates, encouraging them to focus on compromise and respect as they step into the real world.

“While I’m a Republican and Joe’s a Democrat, the fact is, at first, we’re both Americans,” said Boehner.

“Progress only comes when you deal with your opponent with respect, listening as well as talking,” said Biden.

The chair of Notre Dame’s board also backed Father Jenkins saying Biden and Boehner’s careers have been inspired by the catholic call to service.

“In a season in which public confidence in our political institutions and leaders dropped to historic lows and cynicism soars, you have both given witness to diligent, dedicated public service,” said University of Notre Dame Board Chair, Richard Notebaert.

“To the detriment of the nation, in my view, and I think John would agree with me. It has recently become a blood sport…I’ve been there a long time. John and I served together for over 25 years. I’ve been elected to the Senate seven times and vice president twice. I’ve not seen it like this in my career,” said Biden.

Both Biden and Boehner were received warmly by the graduates and their families, even though protesters lingered outside the university grounds.