Biden drops in on Detroit's Labor Day rally to campaign 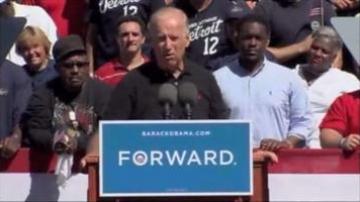 DETROIT -- Vice President Joe Biden made a campaign stop in Detroit before heading to Charlotte for the Democratic National Convention on Monday.

The vice president addressed a crowd during the city's annual Labor Day rally.

In his address, Biden said that American is better off today than it was four years ago.

"You want to know whether we are better off? I've got a little bumper sticker for you. Osama bin Laden is dead and General Motor is alive."

It is a response to Mitt Romney's campaign.

The Republican Presidential candidate recently focused his campaign on asking if America was better now than it was four years ago.